It\’s 10:30am. The light outside is the brown-yellow of a cigarette stained wall because of this season\’s wildfires. Denis Villeneuve released a trailer for his movie Dune yesterday and there\’s a joke circulating around the internet asking, \”How big is Dune\’s marketing budget?\” because the West Coast looks like a balmy morning on Mars (or in this case, Arrakis).

Yesterday I met up with a fellow redditor from /r/PNWriders. We rode for over seven hours: down I-90 to Ellensburg, then Yakima, 410, down 123,  and most importantly through Stevens Canyon. The views weren\’t as good because of the smoke. But it was still the most beautiful ride I have been on. 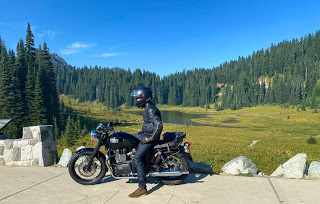 Kris was going to come with us but he was afraid that it was going to get too smoky. But irony won in our favor, and our trip was less smoky than Seattle.

When I went to sleep, I spent what felt like an hour laying in bed, restless, thinking of all the different ways I could have crashed yesterday. —Visions of The Sausage Creature.

This morning I finally finished The Rebel. Here is my GoodReads review: